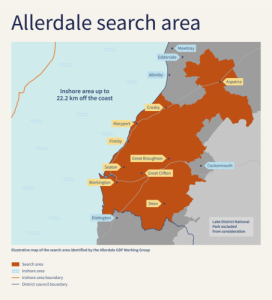 The Allerdale GDF Working Group has concluded its work as an early part of the process to find a willing community and a suitable site for a Geological Disposal Facility (GDF) and unanimously agreed to recommend the creation of a Community Partnership to facilitate further discussion between the community and Radioactive Waste Management (RWM).

Over the last ten months the Working Group has started a conversation with the local community, identified a Search Area for further consideration in the search for suitable sites to host a GDF and explored what it would mean to establish a broader Community Partnership that could take forward further engagement. It is now down to Local Authorities and Radioactive Waste Management (RWM) to decide whether they accept the Working Group’s recommendation and are willing to join a Partnership – a decision which will be taken in the coming weeks.

If one or both relevant principle Local Authorities in Allerdale decide to join the Community Partnership, it is expected that formation will take place around two weeks after the decision is made. The creation of a Community Partnership is only the starting point for a more detailed conversation with the community and does not mean a GDF will be built in Allerdale.